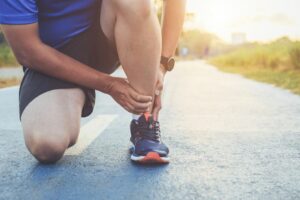 Often you may find yourself thinking, why do I get injured? Or what is the cause of my injuries? When looking at injuries I find it easiest to break them down into two separate categories. The first category being acute injuries and the second being chronic injuries. Acute injuries are ones that occur suddenly and as a result of a specific event or action. For example, you may have sprained your ankle while going for a run in the park. Or you may have tripped in the garden and sprained your wrist. Chronic injuries, on the other hand, are ones that develop over time and as a result of repetitive stress or strain. For example, you may develop arthritis in your knees from years of running or develop stress fractures in your lower back from too much bowling in cricket.

Both acute and chronic injuries have similar presentations as often a chronic injury will be irritated when the patient seeks treatment. While the inflammatory component of the injury would suggest we are dealing with an acute injury the true underlying cause is a chronic condition. This is what we would term an acute on chronic flare up. In order to properly treat a condition like this the underlying cause of the injury needs to be unearthed. An example of this would be someone with long term back pain. They have decreased core stability and have adapted the way they move in order to protect their back. While running they have become over reliant on their hamstrings and adductors (groin muscles) for core stability and end up straining their hamstring. While they have an acute hamstring strain the reason for the injury is the lack of core strength, so while the hamstring needs to be treated so does their core stability in order to prevent reoccurrence of this injury.

While explaining the injury mechanism of chronic injuries to my patients I like to use an equation. This equation is biomechanical dysfunction + inappropriate load = injury. Let us break down these components into their individual parts.

What is biomechanical dysfunction?

When I refer to biomechanical dysfunctions I’m talking about faulty movement patterns. These faulty movement patterns may be caused by an anatomical change or adaptation such as a leg length discrepancy following a hip replacement, or restriction in your joints such as stiffness in your ankle following an ankle sprain. They could also be from a tight thoracic spine that restricts your shoulder movements or a stiff hip that causes a compensatory movement in your lumbar spine. 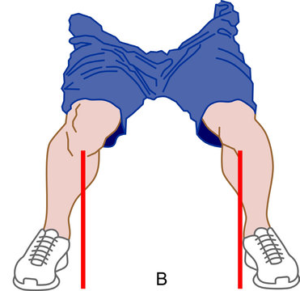 Dysfunctions can also be caused from faulty movement patterns more commonly known as poor technique. Think about a squat, a squat where your knees collapse inwards as you go down, we call this a valgus movement pattern. This is a common technique fault that will cause significant stress on the knees, specifically your meniscus. When your knees collapse inwards you create a tibial torsion in your knee. This is an external rotation of the tibia (shin) relative to your femur (thigh). Think of a pestle and mortar with the pestle being your femur and the mortar being your meniscus. Not a pretty image if you value your knees.

Another example of a dysfunction would be a thrower or tennis player who has weakness through their hips or core. As more than 50% of the energy in a throw is generated through the legs and core (1), a loss of hip/core strength will cause a shortcoming in energy. In order for the athlete to continue throwing fast pitches or fast serves they will make up for that lack of force production by throwing harder through their arms. This ineffective movement pattern/technique will result in decreased force production (slower throws) and extra stress on the shoulder and elbows, predisposing the athlete to injury. A reason why an assessment of throwers with rotator cuff injuries should also include a hip and core stability test.

What is structural weakness?

Structural weakness is a deficiency in the muscle, joint, tendon or ligament that predisposes you to injury. An example of this would be a calf strain that you never fully rehabilitated. The typical presentation of this is you strain your calf going for a run. In the initial stages you get some treatment and you perform your exercises religiously. As your calf improves your attention to it decreases, you get busy with life and you stop doing your exercises because it seems good enough. Your calf appears fine, you have no issues with it, however it hasn’t healed back to its preinjury level. A simple test of doing unilateral (single legged) calf raises would demonstrate that your previously injured calf is actually weaker than your other one. You may be able to do 16 single legged calf raises with your uninjured calf but only 12 with your injured calf. However this goes unnoticed because you just haven’t tested it. As you can imagine this calf is now at risk of injury.

The above example of an unrehabilitated calf strain could also lead to a biomechanical dysfunction as well. What is going to happen when you are doing exercise? You could create a biomechanical adaptation in your movements. If you were to run you may have a reduced push off with your previously injured calf. So if you were to be running your stride length would be affected as you would have less push off on that side. Now if this is to happen either another muscle would try working harder to make up for the weakness or more likely you will just push more through your uninjured side. Uneven force production through your body could cause a torsion force through your body, creating uneven loads, risking overload over a particular muscle or joint and may even lead to stress fractures.

Now if we are to peel the onion one more layer we may discover the very reason you injured that calf muscle is because it was in fact compensating for another deficit in your kinetic chain. For instance you may have a weakness in your gluteus maximus muscle, therefore reducing your push off strength on that side causing your calf to have to pick up the slack and work harder. Or perhaps you have an instability issue through your lower back and pelvis placing more load through your calf. Each of these would be causing your calf to have to work harder than it normally would have to for the mileage you are doing.

How can an incorrect load cause an injury?

A biomechanical deficit or a structural weakness on its own won’t be enough to cause injury, there is another variable that needs to be taken into consideration. That variable is load. In the example of the poor squatting, would squatting once to bend down to pick up a pot plant be enough to cause a dreaded meniscus tear? No, it would definitely be unlucky for you if this was the case. Now let’s say you spend the entire morning moving many pot plants around resulting in you squatting multiple times. Are you now more likely to cause your meniscus injury? Again it’s not definitely going to cause you injury but your chances of injury are getting much higher. Now let’s move this example to the gym and you do squats with weights on your back, or even worse you are doing squat jumps, or jumping over boxes. What is the risk here? You have a technique fault/biomechanical fault and you have added load to this fault and you are now much more likely to cause yourself injury.

Now let us talk about the case of the calf strain. You injured it 9 months ago but you haven’t been aware of it for the last 7. Your friend suggests that you should join them for some park runs or join in an annual event such as the City to Surf or Bridge to Brisbane. So naturally you lace up your running shoes and you start training. The first two to three weeks go well, then on the fourth you start to notice your previously injured calf begins to get a little tight in the mornings. It takes a little to loosen up when you run, so you rub some deep heat into it, you start doing stretches to help release it. Unfortunately your calf limits your training, you have to reduce your running volume, seek treatment as you know you are at risk of causing another tear. This is a case of a structural weakness + load causing injury.

The one thing that lets this equation of injury down is that an increase of load on its own is enough to cause an injury. This is because you are loading the healthy tissue beyond its limits, you are asking the muscle or tendon to respond to forces that it is otherwise too weak to handle. This load could be either in a once off, i.e. lifting too much weight. Or it could be from a cumulative increase in load that your body is unable to recover from. 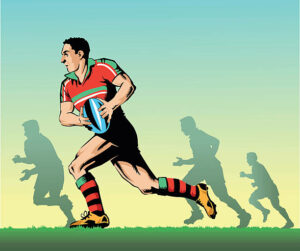 One study (2) on elite rugby league players compared whether load volume and increases in load was a good predictor of injury. What they found was that the average volume of load over a four week period and the load over the following week on its own was not an indicator of injury. However they found if there was a heavy week where the load was substantially higher than the average of the previous four, then the risk of injury was substantially higher. They also found if the week of training had a load less or similar to that of the previous four weeks then they were much less susceptible to injury than those who had a higher volume week.

Even though this research is with elite rugby league players the principles of recovery and tissue adaptation are relevant to everyone. This just demonstrates that a sudden increase in load does put you more at risk of injury. It also shows that a consistent training load offers you protection from injuries. This is particularly relevant for a patient who suddenly does a lot more exercise such as increased walking on holiday, or they decide to clear out their backyard in a single afternoon. Had they been active previously and had done some training then this sudden increase in activity would be much less likely to result in injury or aggravation of an old niggle.

But in order to get stronger don’t I need to increase the load?

For positive adaptations to occur you do in fact need to increase the load or volume of your training. This increase of load is what stimulates changes to both your musculoskeletal system and your cardiovascular system. The management of this load needs to be controlled with gradual increases or for a more advanced training system there may be a higher volume week followed by a lower volume week, to ensure enhanced recovery and reduced injury risk.

So what causes injuries?

Injuries either happen by accident or from a series of events where poor technique or poor biomechanics are combined with an inappropriate load or volume of work. This combination places the greatest stress on your body and can lead to injuries.

About the Author: The Wellness Team